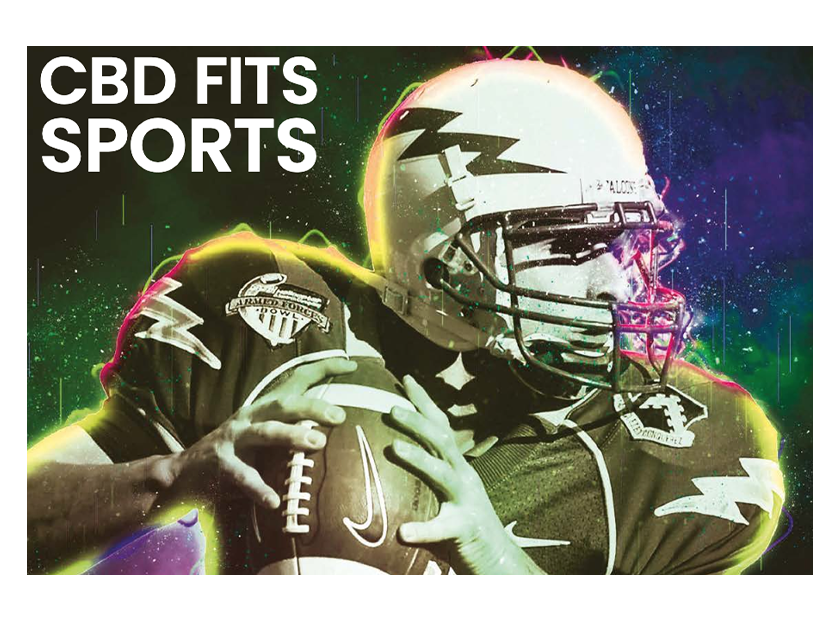 CBD is going mainstream in sports after the U.S. National Football League (NFL) claimed it will award $1 million for research into pain management and cannabinoids.

The League’s goal aims to explore “how safe cannabis and CBD are and if they work, particularly as a potential alternative to opioids.” The study will supplement the committee’s ongoing exploration of pain management and athletic performance in NFL players.

In a press statement, the League stated: "for years, the NFL suspended players if they tested positive for marijuana multiple times. That changed with the collective bargaining agreement approved a year ago. Now, the league wants to know more about how safe cannabis and CBD are and if they work, particularly as a potential alternative to opioids - an interest that follows broader societal concerns about pain management and the use and risks of powerful opioids.

"Another piece of recent news regarding the use of CBD in sports competitions comes from Japan. For the first time ever, athletes attending the 2020 Summer Olympics will be allowed to use CBD3. In 2018, the World Anti-Doping Agency announced that it removed CBD from its list of banned substances. However, athletes will need to make sure that their CBD products do not contain more than 0.3% THC.CBD is not only attracting regular consumers but also professional athletes.

Athletes stress their bodies as stressed training stimulates increased performance, but physical trauma or prolonged workout may also lead to injuries and pain. However, chronic use of over-the-counter pain relievers may provoke additional health risks. In such a landscape, athletes are attracted by CBD’s promises of pain relief and reduced inflammation without the risks associated with opioids and pain relievers.

CBD (or cannabidiol) is one of the many cannabinoids of cannabis. Unlike THC, it does not produce psychotropic effects. CBD acts as an antagonist of THC, and it does not bind to receptors CB1 and CB2 of the endocannabinoid system.

CBD has several properties and benefits. It is commonly used to treat anxiety and insomnia. It also has analgesic and anti-inflammatory effects. At the medical level, CBD is used in the treatment of childhood epilepsy, such as Dravet and Lennox-Gastaut syndromes. Numerous studies4 show that CBD can reduce the number of seizures. Furthermore, CBD can be valid for the treatment of different types of chronic pain.

Athletes use CBD in several ways and for different reasons. Before the competitions, athletes may be stressed and suffering from anxiety. CBD can be a valid relief to help the body to suppress anxiety and stress, allowing athletes to continue training by limiting the stress response to workouts. CBD is used after a competition or a stressful workout. Thanks to its anti-inflammatory properties it helps the body speed up recovery, but when pain occurs because of the stressful workout, CBD helps to reduce pain due to its analgesic effects.

It can also give athletes improved sleeping cycles, prevent inflammation, boost metabolism and reduce food intake, which can help them lose weight. However, little is still known about CBD’s weight loss effects, and more research about this topic is needed.

As highlighted in a scientific paper published in Springer in 20205, CBD has been reported to exert several physiological, biochemical, and psychological effects, that have the potential to benefit athletes. However, the studies taken into consideration are limited. “The central observation is that studies directly investigating CBD and sports performance are lacking, and until these are conducted, we can only speculate about its effects,” the researchers stated.

Thanks to its effects, CBD attracts athletes not only as consumers but also as investors and advocates. More athletes are investing in CBD, not only because the market is promising but also because this cannabinoid seems to perfectly adhere to the athlete lifestyle. The American Olympic artistic gymnast Gabby Douglas (three Olympic gold medals) invested in Motive CBD, a line of CBD6 products designed to help athletes train, perform and recover.

NBA star Kevin Durant invests in cannabis and CBD through Thirty Five Ventures, an investment firm co-founded with his business partner, Rick Kleiman. In 2019, Durant joined the advisor board of Canopy Rivers, an investment and acquisition company specializing in cannabis.

The bond between sport and CBD seems to have a bright future. However, as the legal status of CBD differs from country to country, not every professional athlete may experience the benefits of CBD. But the global trend shows that CBD companies are shifting (or including) the focus of their businesses towards the professional sports industry. The reasons for such interest don’t lie only to satisfy athletes but also to get the attention of millions of new potential consumers.

Furthermore, cannabis companies are also partnering up with sports leagues or teams to conduct research and development studies about the impact of cannabinoids on sports performance. The mutual interest between CBD and sports shows that the CBD market may have found an ally to get rid of the stigma related to cannabis.