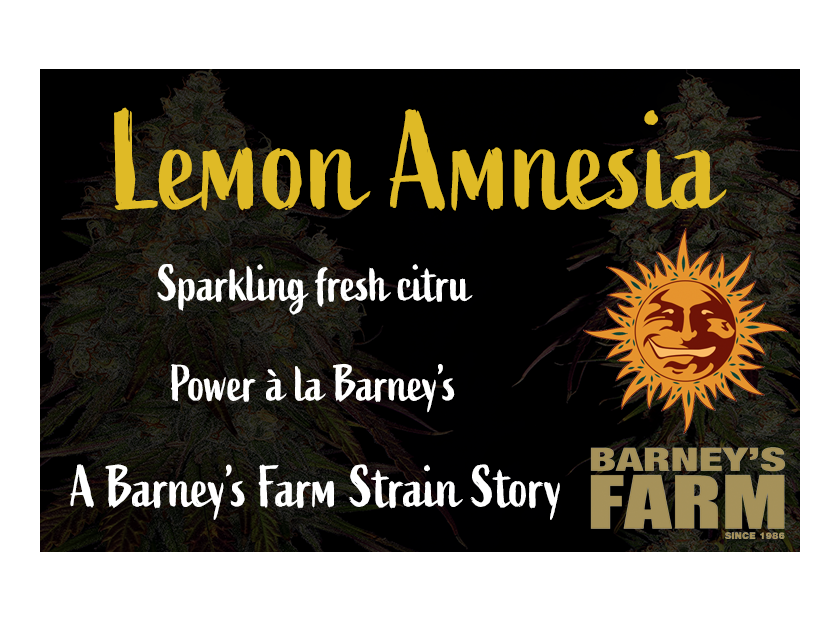 Which cannabis breeder wouldn’t eagerly snatch at the opportunity to secure the original genetics of a new-fledged High Times Cannabis Cup winner strain? Soma Seeds’ Amnesia Haze emerged as the superior champion of the HTCC 2004. The lucky breeder I’m talking about was Derry from Barney’s Farm – after the Cup, he received Soma’s best Amnesia Haze phenotype.

Derry now faced with the question, which variety he’d ideally cross Amnesia Haze as it naturally wasn’t the intention of Soma’s handing-over that this strain would become part of Barney’s Farm range in its unaltered pure form. Derry’s breeding guideline then was to make his new Amnesia Haze hybrid Sativa dominant as well.

Plants grow medium-tall within 60-65 days of blooming, producing long, dense buds, the dry yield of which per sqm can add up to an incredible 550 grams. The strain can thrive outdoors, too, crossing the finishing line in the first to the second week of October.

“Bella figura” is already in the veg stage

This most promising cross from Barney’s Farm was a must-grow for The Doc, who has a history of successful growing strains containing Amnesia Haze genetics. Germinating the two feminized beans was the usual Barney’s child’s play. It took the seedlings less than three days to lift their heads above the ground.

The Doc calculated that with such a Sativa dominant variety, a veg time of three weeks should be sufficient to yield well-proportioned plants in the end. The growth result achieved after this period seemed to prove him right already, with the two Amnesia Lemon specimens vividly having grown upwards, to almost identical heights of 36 and 37 cm.

In doing so, they hadn’t neglected lateral branching and formed a solid scaffold of branches. The relatively slender leaves were distinctly leaning towards the Sativa side. Full of happy anticipation, The Doc said: “Already with ‘bella figura,’ the two plants enter into the flowering stage where they’ll certainly explode anew. I think this is going to be a big cultivation show!” 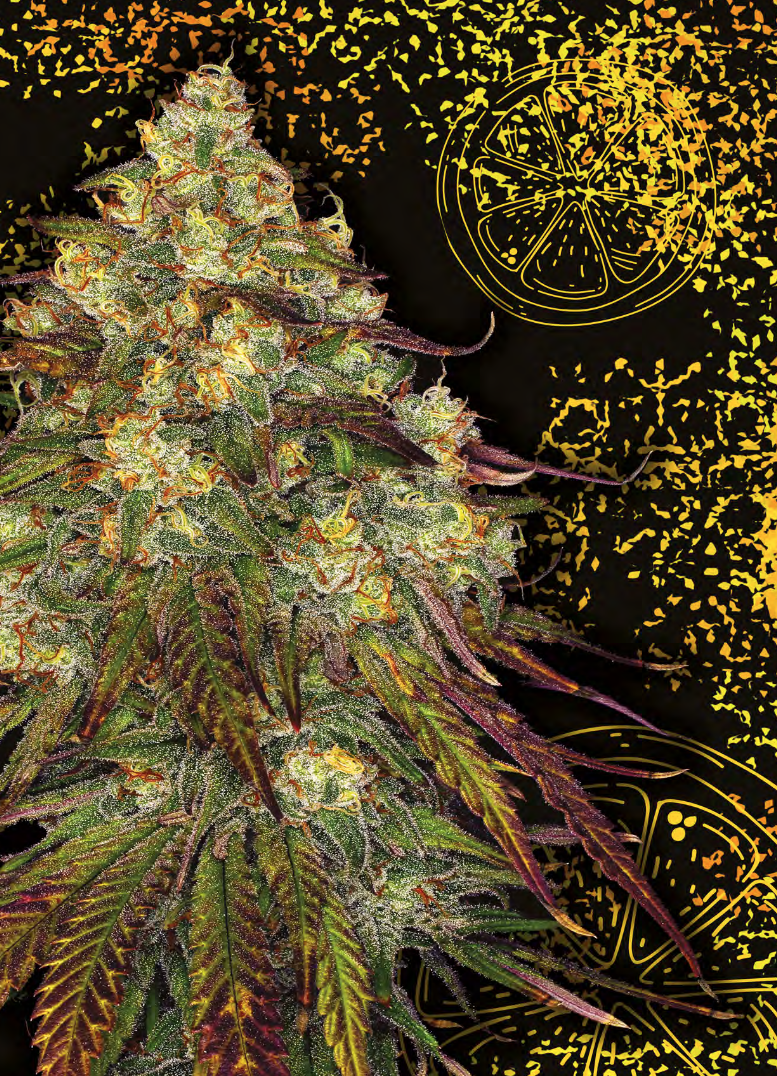 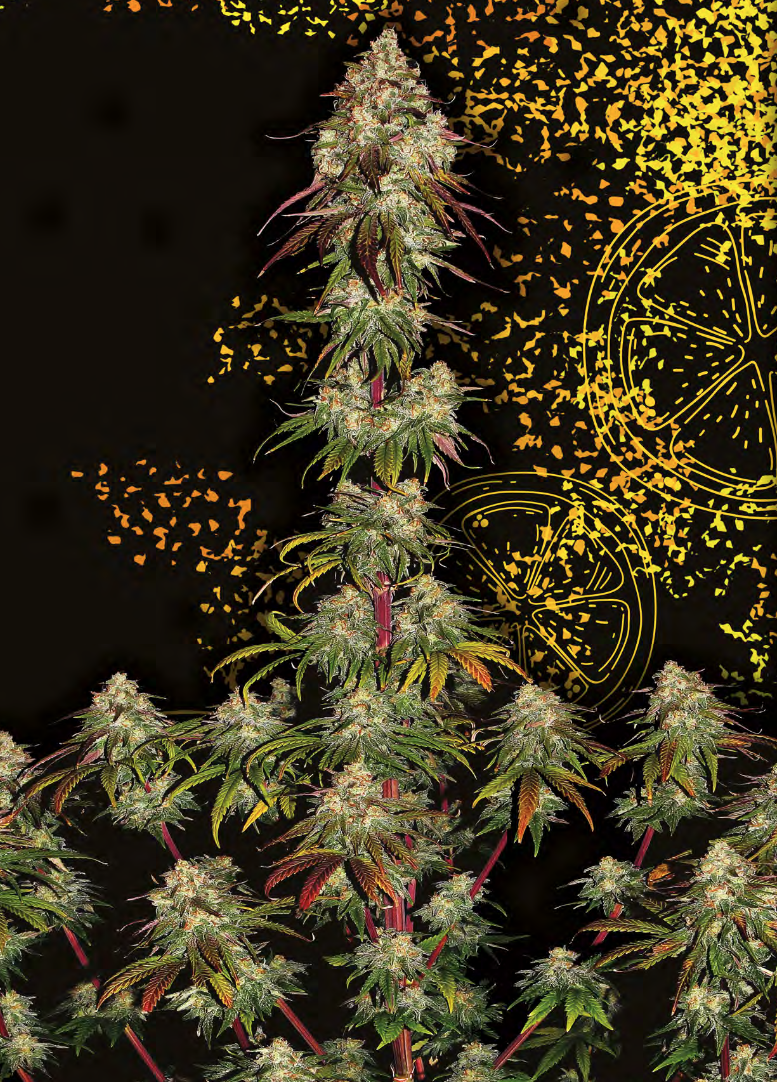 Just as expected by The Doc, the plants exhibited a very pronounced stretching behavior, with a height gain factor of at least 2.5 during the first 4.5 weeks of flowering. While stretching that vivaciously, they created a plethora of budding sites that developed magnificently, rapidly putting on size and weight and displaying a relatively high calyx-to-leaf ratio. Soon a long central cola was sticking out from the middle like a rampant rocket, a rocket around the base of which numerous chubby side buds were orbiting like satellites.

Both Amnesia Lemon plants followed this flowering scheme, remaining nicely uniform in the flowering stage, too. And uniform, in this case, translated as likewise fat, dense, and resin-soaked after 61 and 63 days of blooming, both specimens had practiced real green magic. It produced impressive Sativa dominant buds en masse. In the last three weeks, they had become heavily engorged, which opened their resin gates wide.

It flooded the calyxes and sugar leaves with trichomes galore, with a breezy lemonlike scent stimulating the senses. “That’s what I call a spectacular finish,” an elated Dockie reported. Ending with 92 and 96 cm in height, both plants had come close to the one-meter mark.

After drying: A true feast for citrus aficionados

A vast amount of dry Amnesia Lemon buds was piling up on the scales some weeks after harvest; then, the total yield was a generous 193 grams. In its dried form, the aroma of those bone-hard “trichome dream” nuggets turned out to be even more lemony than before.

These extremely terpy buds are smelling like homemade lemonade with a branch of rosemary in the bottle, having a strong lemon bottom garnished with a spicily herbal note - a true feast for citrus afficionados!”, The Doc happily wrote into his grow diary.

Amnesia Lemon works like an activating vitality shot for The Doc

Half a gram of Amnesia Lemon was placed into his Crafty+ vaporizer then, and bingo! – the was test session was about to begin. The aroma sucked in with the first vapor cloud provided a fresh, lively flavor that was sourly citrusy in the first instance and revealed a sweetish element. Which, accompanied by appreciative smacking sounds, made The Doc enthuse “It fills your entire mouth with yummy freshness, what a tasty psychodelicacy Amnesia Lemon is!” The strain’s effect was two voluminous hits made his head and body vibrate; he felt an ascent of tingling energy and sunny euphoria.

Amnesia Lemon worked like an activating vitality shot for The Doc that snapped him out of his lethargy. It motivated him to finally tidy his living room – of course not without inhaling more vapor in between. “Wow, this stuff kicks you forward,” he stated afterward, “It’s an excellent doer-weed for those who don’t wanna goof off every time they use marijuana.

Summing up his experience, he said, “Amnesia Lemon delivers sparkling fresh citrus power à la Barney’s! Once again, a strain from breeder Derry that ticked all the boxes and enthused me from beginning to end. It makes me happy that one can always count on this seed company. Can’t wait to do the next Barney’s Farm strain….” 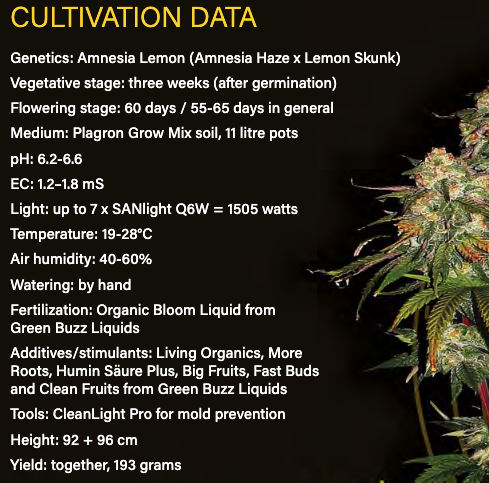