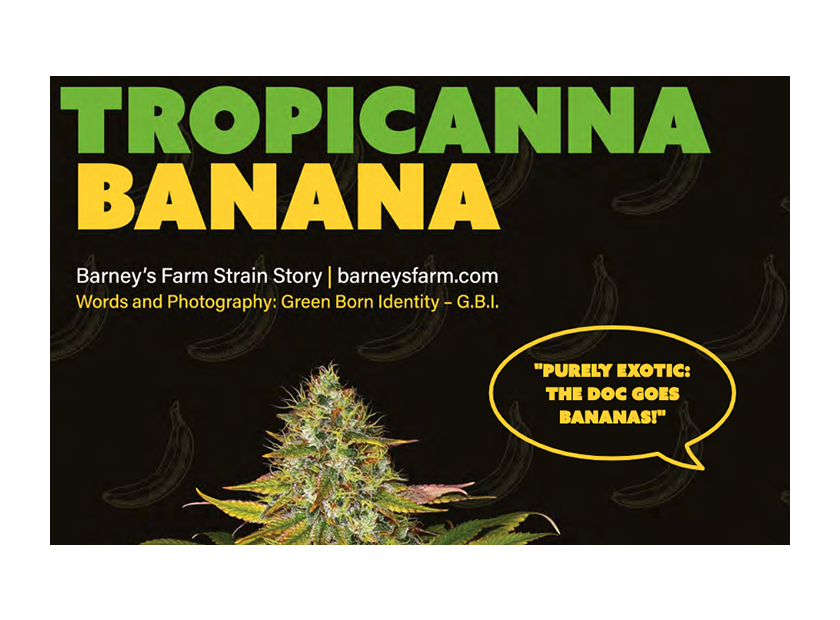 Barney's Farm's Cali Collection is bursting with glorious strain highlights, and some of them come to you in tropical fashion.

Yes, tropical is topical! The most recent example of this is their canna creation, "Tropicanna Banana." The sound of this strain name alone instantly makes you mentally shift to a white sandy shore in the south sea and join a beach party with a tasty fruity cocktail in one hand and a likewise fruity spliff in the other. Fittingly, Barney's describes Tropicanna Banana as "a mesmerizing tropical cocktail of fresh and fruity flavors," and its taste is supposed to have a touch of banana.

The strengths of this slightly Sativa dominant hybrid (60:40) not only lie in its exquisite aroma, but of course, it also boasts an unusually high yield potential – up to 700 grams dry are achievable indoors per sqm. – as well as the heaviest trichome coating and an accordingly strong effect, fueled by a revved-up T.H.C. count of 22-25%. This variety's superb characteristics don't come as a surprise if one looks at its fine pedigree: Tropicanna Banana consists of Tropicanna (Girl Scout Cookies x Tangie) x Banana Kush. So exclusively elitist genetics went into this cross, which produces strong plants that, given a long veg stage, grow to indoor heights of up to 110 cm and finish within 65-70 days of flowering.

Another plus of this strain is its outstanding resilience against mold and spider mites. Tropicanna Banana also excels in an outdoor environment under favorable conditions growers may reap in extremely ample harvests, according to Barney's up to two kilos per plant. Finish time under natural light is between the second and third week of October. Despite its slight Sativa dominance, Barney's banana-style exotic's kind of effect is relaxing and calming, and it also has a reputation for being euphoriant. A happy tropical weed great for unwinding – spot-on for The Doc, a big fan of this Dutch seed company ever since his first Barney's Farm strain grow experience. The usual two test seeds planted had flawlessly germinated after three days.

Just as described, the two plants exhibited robust and vigorous growth and started to branch out early, which had led to a multitude of vigorous side shoots when The Doc moved them into flowering four weeks after germination. Also, they were pretty uniform. They stood at the end of the growing stage at 44 and 47 cm in height. "That's what I call a great growth performance; these two plants are looking perfect so far!", The Doc praised Tropicanna Banana.

Three weeks into flowering, The Doc reported: "They are still very homogeneous and pretty much willing to stretch! In the first three weeks of flowering, they've almost doubled in height, and the stretching stage even isn't over yet.

At the shoot tips and in the axils, tightly filled young buds have emerged out of which numerous white pistils and little leaves are protruding; they already display a resinous shimmer." Two weeks later, he continued, "That early trichome shimmer turned out to be a prelude to a resin gland hyper production mode! Because the buds - meanwhile are pretty voluminous, by the way - are covered by a dense lawn of trichomes giving off a very present scent that means a new olfactory experience to me: it's an extraordinary mix of grapefruit, banana, and soap! Yes, this scent has a hint of saponaceous note, but it reminds me of fragrant wellness soap in a positive, pleasant sense. However, the grapefruit and banana notes are battling for scent supremacy here, and both of these elements are distinctive.

A mighty gush of resin spills over big hard buds

A good eight weeks of flowering had passed when The Doc noted down, "A mighty gush of resin glands has spilled over the buds; they are wrapping themselves in a super frosty resin coat now. Even big multi-fingered flower leaves are entirely coated in thick oily resin layers. Also, the buds have become as large-sized and tight as I had expected.

With a pretty low leaf count, that will facilitate harvest work later. What a lovely bloomage! The floral structure of both plants is almost identical; I find it hard to distinguish them from one another. Which is also true for their shape - in the course of flowering, they've evolved into a beautiful looking diamond-shaped growth habit."

With 65 and 68 days, the two Tropicanna Bananas precisely hit the flowering period of 65-70 days as stated by Barney's Farm and were harvested by The Doc. The sweet fragrance they were exuding had risen to overwhelming intensity, "a bewitching tropical scent that would certainly be appreciated by non-cannabists, too," supposed The Doc. With final heights of 98 and 105 cm, the two plants lived up to Barney's forecast.

Not a little to the surprise of The Doc, the dry yield of both plants was a heavy combined 220 grams: "I would have eaten my hat if these two stunners had failed to surpass the 100 grams mark on the average!" he laughed. The dried Tropicanna Banana flowers, coated with a lavish trichome icing, were as sticky as super glue, raising the highest of expectations.

Once dried, the buds revealed quite a phenomenon: the scent's banana note had come to the forefront even more and now uncontestably ruled that sweet tropical odor. "Pretty amazing; that's an unmistakable banana-infused flavor now. That sourly grapefruit component is still present but kind of watered-down. And there's no hint of soap any longer, so nothing's left but a purely tropical scent now", the old grow veteran enthused.

Vaporizing the strain: The Doc goes bananas and experiences a crescendo of euphoria

To test the strain's effect and taste, The Doc opted for his Crafty vaporizer this time. After he had loaded the filling chamber with half a gram and the device had reached operating temperature, he was good to start. He took a long deep 10-second draft and kept the vapor in his lungs for a spell while he savored the delicious taste of Tropicanna Banana: "I'm going bananas! This stuff tastes like a sweet banana snack in the form of vapor, simply phenomenal! With three deep hits down his lungs, The Doc began to feel that Tropicanna Banana had planted a nucleus of mirthfulness into his head, releasing a swelling wave of euphoria that eventually built up to a real crescendo.

With his head in the clouds, The Doc grinned from ear to ear, thinking, "why would you go on holidays if Tropicanna Banana brings you tropical easiness and happiness and makes you take a stroll in your mind along an endless white beach?" After a while, a physically relaxing effect came into play as well, perfectly complementing that intense euphoric sensation. The Doc didn't feel slackened, though, but simply lithesome and temporarily released from the chronic limb pain in his legs. His mental tropical holidays lasted a good two hours, and he started his next vaporizing session.

In summary, he said, "once again, a fascinating variety from Barney's Farm, genuinely adorable! Tropicanna Banana fully lives up to its fruity name, and this strain is like a tropical dream come true.

One thing's for sure - now and then I'll let myself be carried away by this weed from the dismal German winter for a sunny mental trip to the tropics…." 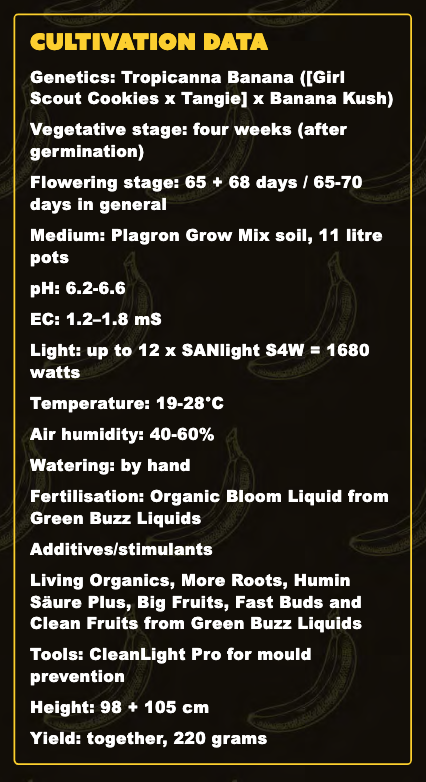