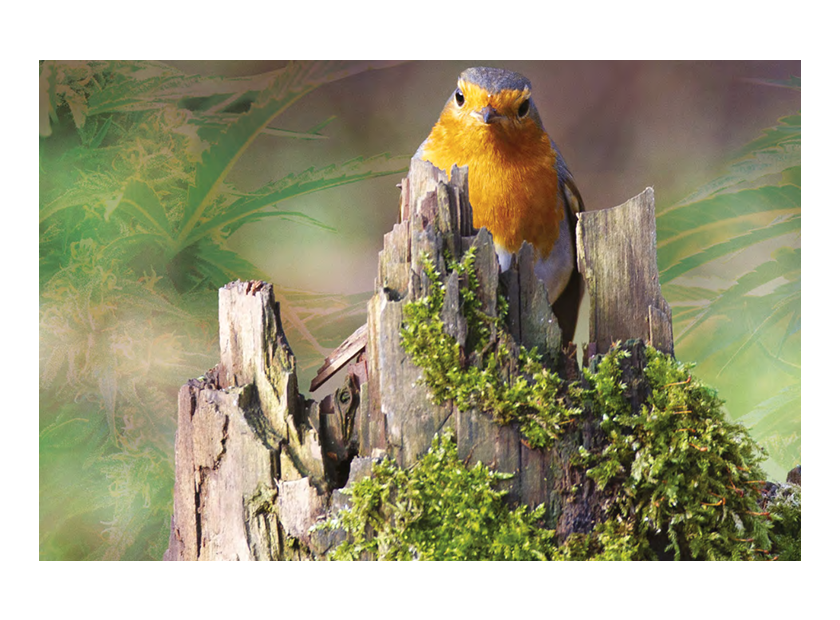 You may remember that a few years ago we reported on the sudden appearance of cannabis plants that were found to be growing in public locations around the UK.

People across the British Isles were amused and bemused in equal measure when lush bushes of leafy green seemed to be cropping up all over the place with no indication of how or indeed why this was happening. It didn't take long for people to claim responsibility and the founder of an activist group called 'Feed the Birds' soon came along and explained the logic behind this series of strange occurrences.

His reasoning was very simple: planting seeds in public places would stimulate conversation about cannabis and draw attention to the fact that the UK government has labelled cannabis as illegal for generations regardless of its potential benefits. Working alongside a growing band of allies, this plucky band of cannabis enthusiasts picked prime locations to plant their seeds in the hope of gaining maximum exposure for their cause. Numerous iconic locations were chosen, including 'The Shard' in the heart of the capital and the headquarters of the BBC, in the hope of showing how ludicrous it is that the government continue to demonize a plant that can grow wild in the British climate.

Cleverly, the brains behind the organization recognized that it was less than ideal to be caught in the act of planting cannabis when it is labelled as an illegal substance and, consequently, they hatched a cunning plan. As the name suggests, the distribution of the seeds was done under the guise of providing a source of nutrition for our avian friends.

While it was (and indeed still is) illegal to actually plant cannabis in the UK (unless you have a license from the government, of course), there is no law that prevents people from feeding seeds to birds. With this in mind, the whole concept became one of giving back to nature with the added bonus that a small number of the scattered seeds would likely escape digestion and take root where they lay.

In essence, this takes advantage of some legal loopholes that would make it almost impossible for the police to get a conviction as cannabis seeds are not illegal to possess (unlike the plant itself or the results of cultivation). Unless it can be proven that the seeds were sown intentionally with the expectation that they can germinate and eventually be cropped there is no legal leg to stand on.

More recently, it seems that a new wave of activists have taken it upon themselves to promote not only the plight of prohibition for cannabis but also to acknowledge the potential for hemp to become the UK's next 'super crop'. Countless acres of the UK remain untouched currently, and sources indicate that there is an ever-growing need for an increased covering of 'wild' plants in these locations. Aside from providing a source of food for insects and pollen for pollinators, wild flowers help to improve the quality of soil and reduce the levels of CO2 in the atmosphere.

By scattering hemp seeds in areas that have been left to degrade, it is hoped that it can breathe new life into barren lands. Hemp can contribute to the overall health of an area and grows incredibly well due to its rugged nature. Moreover, the visibility of hemp plants will help to improve public opinion over time as people will hopefully recognize that there is more to the recognizably-shaped leaves of a cannabis plant than just getting high. When you actually sit down and look into the numerous applications of the hemp plant, it is truly staggering to think about how backwards the continued era of prohibition truly is.

Not too many years ago, a group calling themselves The Hemporium started a campaign called 'Handful of Hemp' which actually offered to send people packets of hemp seeds for them to scatter in the wild. The people behind it were under no illusions about how people may react to the idea, but they also recognized that there was much more to hemp than what the public perceived.

Having run a business that made use of hemp in everything from topical balms to clothes and foodstuffs, they wanted to share their knowledge and experience with others in the hope of raising awareness and promoting a better and more honest perception of hemp in the UK. It's people like this that really drive the narrative forward and you have to admire their tenacity and motivation.

It's not easy being green when you live in fear of reprisals for your actions at every turn, but that doesn't mean that the fight isn't worth the trouble. Now it's time for more people to take up the cause and then we can hopefully see outbreaks of hemp all over the place.Acts like this are certainly a catalyst to get people talking and you can see why people think that a visual, natural protest like is likely to have more of an impact over time than simply trying to preach at people about the potential for cannabis to heal.

As we move forward, there is more than a glimmer of hope that hemp will be seen as a viable cash crop and the idea of seeing fields of a different type of green is certainly appealing, so what's the harm in getting a head start with a little wild seeding? I remember one of the things that stood out in my mind when I first learned about 'Feed the Birds' and that was their tagline: "resistance is fertile".

If we are to move forward collectively then there will always be the need for people to think outside of the box. How else are we to make progress if we don't take risks and what have we got to lose by trying something a little bit different? All too often we find that the path to ending prohibition stagnates simply because people stop pushing the issue, or they get fed up of hitting the same barriers over and again, so anyone who tries a new approach deserves a pat on the back in my book.

If you want to get involved then have a look online and see if there's anyone who can point you in the direction of some nice packets of seeds. Who knows? Maybe next time you go out into the big wide world you might notice a few different plants springing up as you tiptoe through the tulips.

IMAGE BY ISTVAN POCSAI FROM PIXABAY